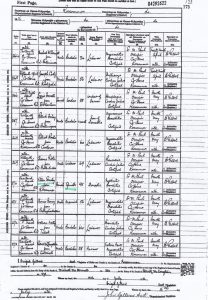 The entire page on the register was reported by “Sr M Paul, Occupier, Co Home Roscommon”. I assume that Sr is short for Sister. I am also assuming that this is a reference to the Hospital.

On 4th May, Sister Paul is back with the Registrar. The first entry is for 25th April, age 55 (Heart Failure). The next seven entries are deaths that took place in March. Why weren’t these reported earlier?

That is seven deaths in eight days. I am not medically trained, but this looks like a problem threatening to get out of control. It all took place in the time before antibiotics. Perhaps the staff were so busy in March that no one had time to report the deaths. Possibly they chose to isolate themselves from the general population in a self-imposed quarantine. It is also possible that Sister Paul was unwell for part of the time.