It is easy to identify ways in which the British authorities could have done a better job in the Boer War. Well it is with the wisdom of hindsight. Not for the first time, and certainly not for the last, military leaders were slow to adapt to new tactics. The Boers knew that they could not expect to win a battle fought on the British terms. They adopted guerrilla tactics. Lightly armed men moved quickly on horseback. They exploited their knowledge of the local terrain. They enjoyed a lot of support from the local population.

Overwhelming force finally had a decisive impact. The authorities adopted a scorched earth policy. The local population were forcibly resettled, were concentrated, into camps. Farms were destroyed. These measures made it very difficult to mount ‘hit and run’ tactics. These settlements were among the first concentration camps. Historians debate how much deliberation went into the poor conditions. Certainly there was incompetence. In today’s parlance we would refer to a failure of the duty of care. (See https://en.wikipedia.org/wiki/British_concentration_camps for more information.)

In January 1906, the 3rd Manchester Battalion was sent to guard two camps. One was located at Middleburg in the Transvaal. The other one was further east at Barberton. They were soldiers, not social workers. They had been trained to fight. If they were told that the inmates were responsible, however indirectly, for casualties suffered by their comrades then sympathy would have been in short supply.

Over 1300 people died in Barberton Camp. The vast majority were women and children. Conditions were cramped. Sanitation was poor. Food was restricted. 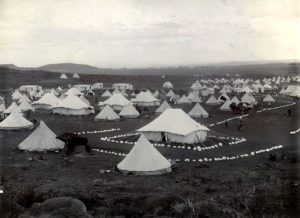 Whatever your view on the tactics adopted by the British authorities, it does appear that they were successful. Even as Patrick and his fellow soldiers were being sent to the Transvaal, the policing duties were being scaled back. The 3rd Manchester Battalion was scheduled for disbandment. This happened at the end of 1906. Some men were discharged. Others were transferred. Some were sent to join the 1st Battalion back in the United Kingdom. Patrick was transferred to the 2nd Battalion on duty in India. Another chapter was about to begin. As the song says, “it’s a long way to Tipperary”. It is also a long way to Roscommon.