In almost every country in the world, there are events that are central to the collective memory. Examples include the release from prison of Nelson Mandela (1990), the death of Diana, Princess of Wales (1997), the attack on Pearl Harbour (1941) and the fall of the Berlin Wall (1989). These events act as a pivot point in the national consciousness. One can divide history into events that happened before, and those that happened afterwards. Anyone seeking to understand Irish history must examine the impact of ‘the Great Famine’. It is also called the Potato Famine. Even the most cursory search of the internet quickly reveals a massive body of literature on the subject. Few people with wealth or power emerge with much credit from that dark time.

At one level, the famine can be attributed to the spread of a blight that caused the potato crop to rot. The same infestation affected Belgium, the Netherlands, northern France and southern England. There a number of factors that turned a major problem into a national catastrophe in Ireland. 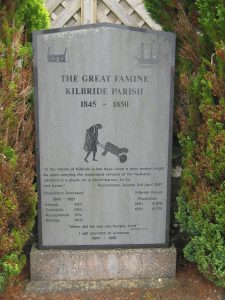 The two main results of the famine were emigration and starvation. As already stated in ‘What sort of place is Roscommon (1)?’, the impact was uneven across the country. Roscommon was one of the worst affected places.

The plaque shows the figures in stark detail. (The plaque is in the grounds of St Bridget’s Church at Four Mile House.) In a ten-year period, Kilbride Parish (home to my relatives) saw a 45% reduction in population. In practice, the majority of the decline would have been between 1845 and 1850.

Landlords were responsible for paying the rates of every tenants whose rent was less than £4 per year. When the crop failed, tenants had no means to pay their rent. A landlord with many small tenants was therefore exposed to a significant bill. A common reaction was to evict small tenants and re-let the land (if possible) in larger packages.

For the family historian, the question is, “Where did the survivors go?”. By 1851, a quarter of the population of Liverpool was Irish. That is a good place to look. I have already established that some relatives ended up in Dewsbury, Yorkshire. What about further afield? 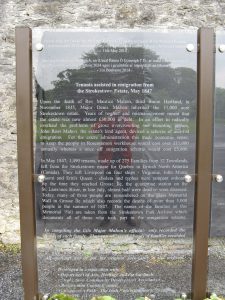 Many tenants were packed into ships and sent to North America. It was cheaper for the landlord to do this than meet his obligations in other ways.

At the time, there was no restriction on going to Canada, because both places were part of the British Empire. The United States was expanding rapidly. Records exist for both countries at the time when the local records in Roscommon were poor or non-existent. Searches in these countries will be covered at a later date.