The Griffiths Survey refers to three Ormsby people as tenants in Roscommon. These are in addition to the landowning Rev. William Ormsby (already covered in ‘Rich Ormsby and poor Ormsby‘).

Isabella Ormsby has two houses and associated gardens at Drum, near Athlone. One of the houses was sublet. There is a death of Isabella Frances Ormsby, age 70, in Boyle in 1867. This is a good match. Isabella and Frances are not traditional catholic names, at least not in Ireland. My guess (and it is only a guess) is that Isabella was connected to the wealthy line.

Secondly, Louis Ormsby was recorded at Emlaghkeadew. This townland is 4 miles due west of Roscommon 5 miles north of Tobervaddy. His holding consisted of 317 acres and a substantial house. This was a very large farm by comparison to most others at the time. (The Beechwood House estate in Tonlegee, referred to in “Servant in Tonlegee” was 301 acres). 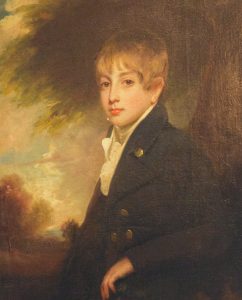 The farm bordered the Rivers Suck and Smalghrean. The actual land owner was Sir Charles Henry Coote (9th Baronet Coote – pictured, at the age of about 11). He was another MP, and may therefore be expected to have known the Ormsby-Gore family. Again, it must be pointed out that Louis is not a traditional catholic name. There is also the relative proximity to Tobervaddy. Another guess on my part is that Louis was a descendant of the one of the rich families.

The third and final group were Mary and Charles Ormsby in Garranlahan Beg. They occupied 15 acres in Plots 8A and 8B. Despite my expectations, these plots were not contiguous. The house was in 8B. There are still houses in that immediate vicinity. It is highly likely that their descendants are the ones that appear on the 1901 and 1911 census returns. This will be covered in a subsequent article. (I try to keep these articles short and succinct.)

I would love to be able to prove some connection with any of these Ormsby people to the servant girl who became my great grandmother. It seems a forlorn hope unless there is some DNA evidence. There are just too many gaps in the records to be able to draw definitive conclusions.