The Tonlegee in Kilbride is close to the home of John Stanly. There is no Ormsby family recorded on the Griffiths survey for that townland. Furthermore, there are no particularly large houses. I appreciate that even people of quite modest means could afford to employ a servant in the 1860s. The ‘other’ townland provides a more probable source of employment for Bridget.

The Griffiths Survey reveals that there was one very large house in the Kilteevan townland of Tonlegee: Beechwood House. I am indebted to the assistance provided by the staff at Roscommon Library for information on Beechwood House. They provided me with a copy of an article in Volume 14 of the County Roscommon Historical and Archaeological Society Journal. 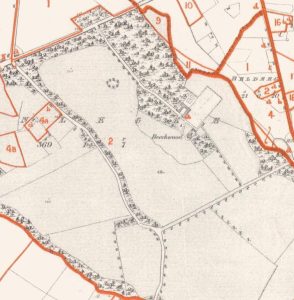 Beechwood House was built in the 1700s. It was part of a very large estate. It is not so much a case of the estate being in Tonlegee, as Tonlegee being in the estate. It was a substantial house. There were 18 windows on the front of the house. 19 rooms were occupied. There was a ballroom. In addition, there were outbuildings and houses for estate workers.

At the time of the Great Famine, the owner was Daniel Ferrall. He seemed to have been the classic case of someone who was asset rich but cash poor. His problems were exacerbated when the Famine caused a collapse in his income. He spent a lot of time moving about to evade his creditors. He died in 1853. The estate passed into the hands of a nephew, Daniel Irwin. In 1858 he was High Sheriff of Roscommon, so very much an establishment figure. He died in May 1866. If Bridget Ormsby was a servant there, as seems probable, she would have left her employment by that time. (Her first child, John, was born in July 1866.)

The subsequent history of the property follows a pattern that will be familiar to students of the time. The last of my (known) Roscommon based relatives died in 1909 (I may discover others!) so I was intrigued to learn of the events.

Between 1921 and 1923, 192 large houses in Ireland were damaged by fire during the widespread civil unrest of the time. Beechwood House was one of those. It burnt to the ground in September 1922. The owner received the sum of £14,000 in compensation. Exact comparisons are difficult, but this represents over £1 million in 2022 terms. The money was invested in rebuilding the house. This was completed in 1925. The majority of the land around the house was compulsorily purchased using powers under the 1933 Land Act. The house and remaining land were put up for auction in 1943 following the death of the owner. The new owner had the house demolished. It was less than 20 years old. This seems to be something of a waste, but it was a symbol of a bygone era.

The site of the house can still be identified on Google maps. The entrance drive runs south of the N63, about 250 metres to the NW of its junction with the L1425. It appears to be the location of some farm buildings.