I am following up on the logic I outlined in ‘More on Brother 2’. (See also ‘Brother 2’ and ‘Still hunting brother 2’) I elected to look for James Stanley, born in Ireland, on the 1851, 1861, 1871 and 1881 census returns. I found 42 separate entries. Unfortunately, not one of them cites Roscommon as a place of birth. I compiled a spreadsheet that showed year of birth as well as location. There are always some variations in year of birth. However, the Agricultural Labourer living in Derbyshire in 1861, 1871 and 1881 is clearly the same person. The man working in retail in Manchester in 1851, 1861 and 1871 is also a single individual and not three different ones. Furthermore, in 1861, he is shown as having been born in Cork, so I can exclude him from consideration. Four others have a place of birth recorded. They can be discounted.

There are seven born from 1851 onwards. They can come off the list: they are too young. I can also take out those who are too old. There is a Sea Captain. This is an unlikely occupation for the son of an Agricultural Labourer from Roscommon. There are a couple of other entries that appear to refer to the same person.

If someone appears for the first time in 1871 or 1881 then these are unlikely to be ‘Brother2’. This criterion takes out another six entries. An 1851 record has a James, born 1833, but part of a large family that includes his parents. Another one for the chop!

All of this work still leaves me with 10 entries. Brother 1 (Thomas) does not appear on the 1851 census. If I exclude the people that only appear in 1851 then I am down to five. It could be argued, with considerable justification, that I have made a lot of assumptions based on tenuous evidence. Guilty as charged! I did use a similar approach to locate living relatives in Dewsbury. This approach can work. I would be interested to hear from anyone who can suggest a more fruitful line of attack. 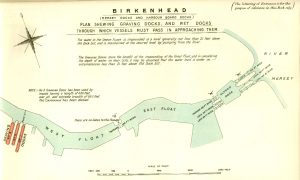 There is a dock labourer in Birkenhead (just across the estuary from Liverpool, and connected by ferry) with a brother (Patrick) and two sisters (Margaret and Anne). There is a tailor in Blackburn and a hawker in St. Helens (both in Lancashire). I have looked at subsequent census returns to see if any more information has been recorded. I examined marriage records for the two sisters. Nothing of particular significance! Not so much reaching a dead end as fading into the fog.

I did revisit the case of the Agricultural Labourer who lived in Derbyshire. James and his wife Mary had three children born in Ireland (in 1841, 1844 and 1851) and a son born in Derbyshire in 1856. The six-year gap between the second and third surviving children coincides with the Great Famine. We know that they left Ireland somewhere between 1851 and 1856. The story about two brothers leaving Ireland does not mention taking children. As the title indicates, hope fades.

The most likely candidate to be ‘Brother 2’ is Michael. His story appears in Redington & Stanley