I am a member of the Roscommon DNA Facebook group. At the time of writing (April 2022), there are over 1,100 members. There are 1482 samples that can be cross checked on Gedmatch.com. (Some members manage samples on behalf of other people.) If I run the analysis on Gedmatch, with a minimum cut off of five centimorgan, there are 567 matches. This sounds impressive. There are a few duplicates (i.e. one person has uploaded more than one kit). The number then has to be reduced where there are matches on a number of chromosomes. And getting hits on multiple chromosomes is good news: it increases the chances of a match being genuine and not random. This takes the number of distinct people down to 458. It appears that I share some DNA with nearly one third of the entire group. If true, this result is staggering. I am not convinced that the results can be taken at face value. Random mutations appear over time at very low levels of match. Applying a cut off at seven centimorgan reduces the number of matches to 63. That is still one in twenty. Is this a credible figure? I am not sure.

As I covered in ‘Why move’, people need a reason to relocate. If you had to walk everywhere, then distances covered were small. Gene pools became quite restricted. This is an argument in favour of many people sharing DNA. But Roscommon is not a small county. It is more than 30 miles from east to west and double that from north to south. That is a factor working against the establishment of a restricted gene pool. 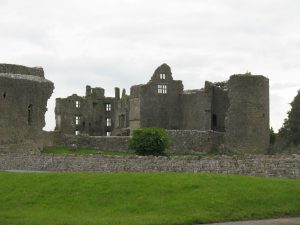 The algorithms on Gedmatch allow a filter to be applied to sort the results by Most Recent Common Ancestor (MRCA). Given the paucity of early records from Ireland, a cut off of 5 generations seems sensible. This still takes me back to the late 1700s. And it cuts the number of people on my list down to seven.

In 1841, the population of Ireland was 8.2 million, and that of Roscommon was 250,00 (249,613 or 253,591 depending on which source is being used). In the previous 60 years, the population of Ireland had slightly more than doubled. If I assume that the growth rate in Roscommon was the same (and there is very little hard evidence to either confirm or deny this assumption) then we are looking at 125,000 for the population in 1781. And a mere handful of these will be the common ancestors that I am seeking!

Ancestry provides me with a list of 393 people with whom I share a measurable amount of DNA. (Measurable in this case is seven centimorgan or above.) These people are likely to be spread across all branches of my family. A common ancestor has been identified for 62 of these people. As with the Roscommon dataset, the vast majority of these have a low level of match. Therefore, the common ancestor is way back in the mists of antiquity. There are 25 people on my list with a common ancestor with whom I share 14 centimorgan or below . There are four examples where there is only 8 centimorgan of DNA in common with me. The information is credible in all cases. We are talking fifth or sixth cousins. This explains why I only recognise two surnames out of the 62. The links go back to the 1700s. The earliest common ancestor was born in 1725. And the ancestors all come from Sussex or Kent, where records are plentiful. It does seem that the more you know, then the more you can find out.