If you can’t go back, then go forward! I realise that not everyone is as obsessive in hunting down obscure clues as me. I found a whole chapter of my wife’s ancestry when I googled the name of one of her relatives. It turned out that a second cousin had been publishing a blog for some time. I made contact. We exchanged notes, and saved each other time by sharing information. Earlier this year (just before coronavirus impacted all of our lives) we were able to meet. I thought that I would look at what happened to some of the people that emigrated to America. The names that emerge might resonate with others. Perhaps another researcher will make contact with me.

As mentioned in ‘Mary Kenney and others’, four children of the marriage between John Stanley and Winifred Kenney left the townland of Islands, Roscommon and subsequently settled in Massachusetts. They were:

Let me start with Mary. It is difficult to say when she arrived in America. The most probable date is in 1889. A 20 year old Mary Stanley arrived in Boston on the SS Scythia. There were no other members of the family with her. This makes her date of birth as 1869. The next clear sighting is on the 1910 census (taken on 15th April). She is the State Infirmary in Tewksbury.  She is recorded as being 44 (born 1866). Just over six months later she died from breast cancer at the age of 46 (born 1863). This illustrates the fact that ages were only ever approximate. Mary was single. Consequently, there are no descendants to trace. Mary left Ireland in search of a better life. Sadly, she did not appear to have found one. 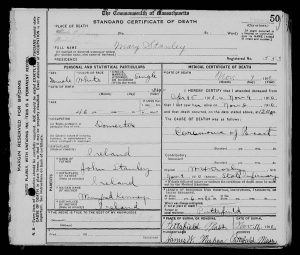